It has been just over a year since the launch of Seagate's IronWolf 110 SSD. In that small amount of time, the market for AFA/NAS SSDs has expanded tremendously with Synology and Western Digital entering the market with their purpose-built products. Building on the 110, Seagate is now introducing its second-generation IronWolf SSD platform, IronWolf 125.

These new solutions from the 125 portfolio feature a completely new build with Seagate opting to no longer use their in-house controller instead of working with Phison on an S12 built with custom firmware. This follows a strong trend in the market where Phison has become an absolute powerhouse in the NVMe space and looks to dominate the aging SATA interface as well. 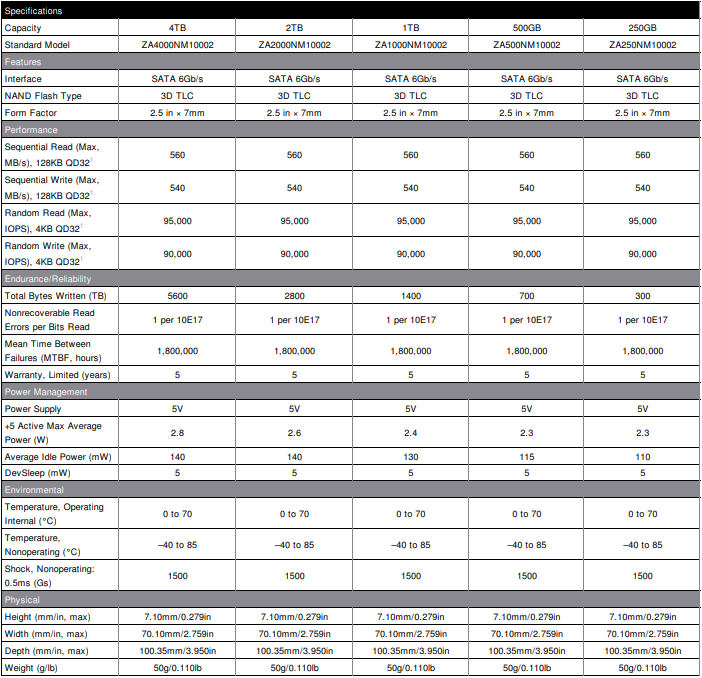 The IronWolf 125 is offered in several capacities - 250GB through 4TB. The model sent for review is the 1TB, so our specification will be in the middle of the chart above. From the specs, our drive is capable of 560 MB/s read and 540 MB/s write, and 95K IOPS read and write. 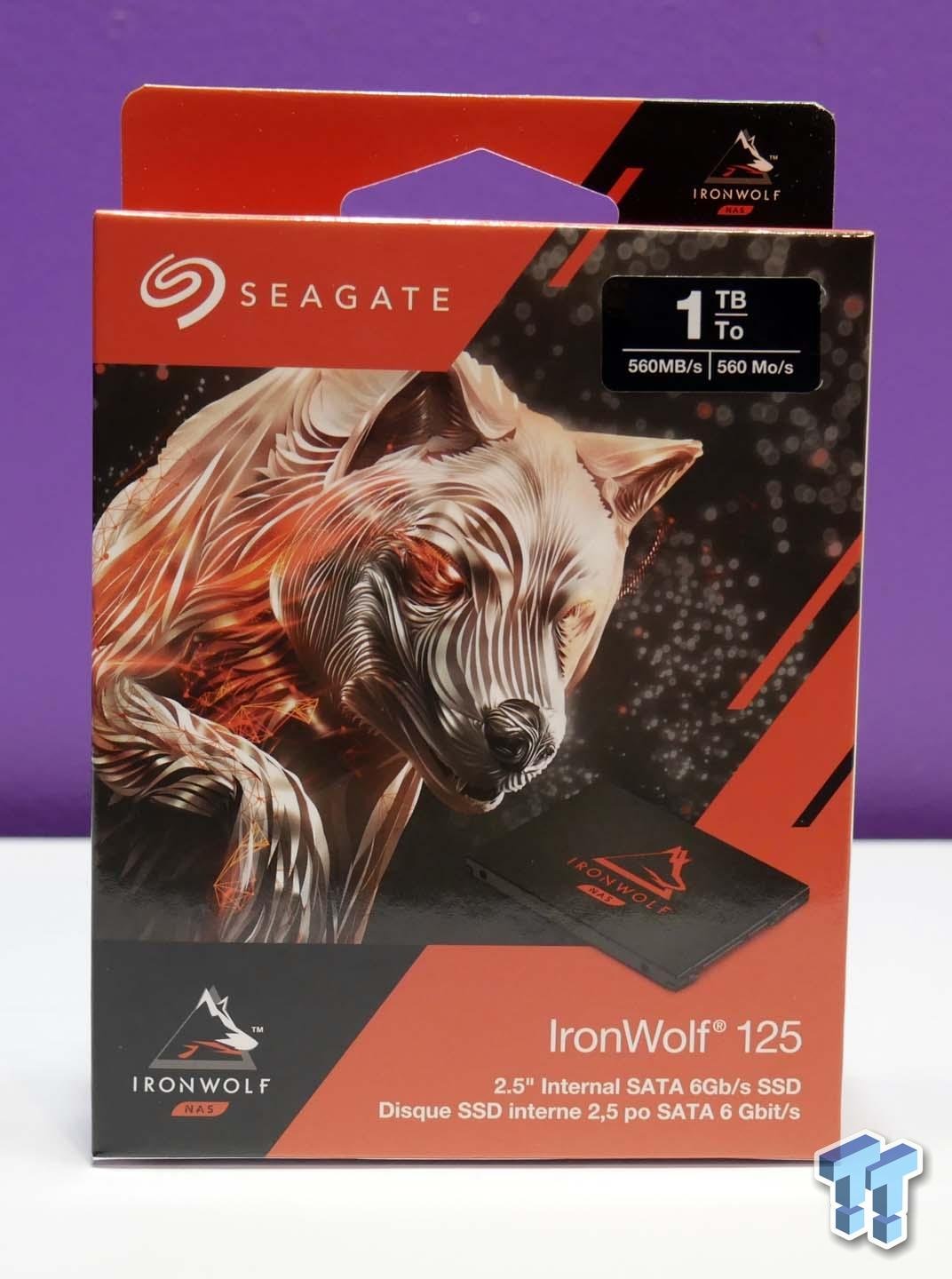 Box art is strong with the IronWolf, capacity listed at the top right with performance. 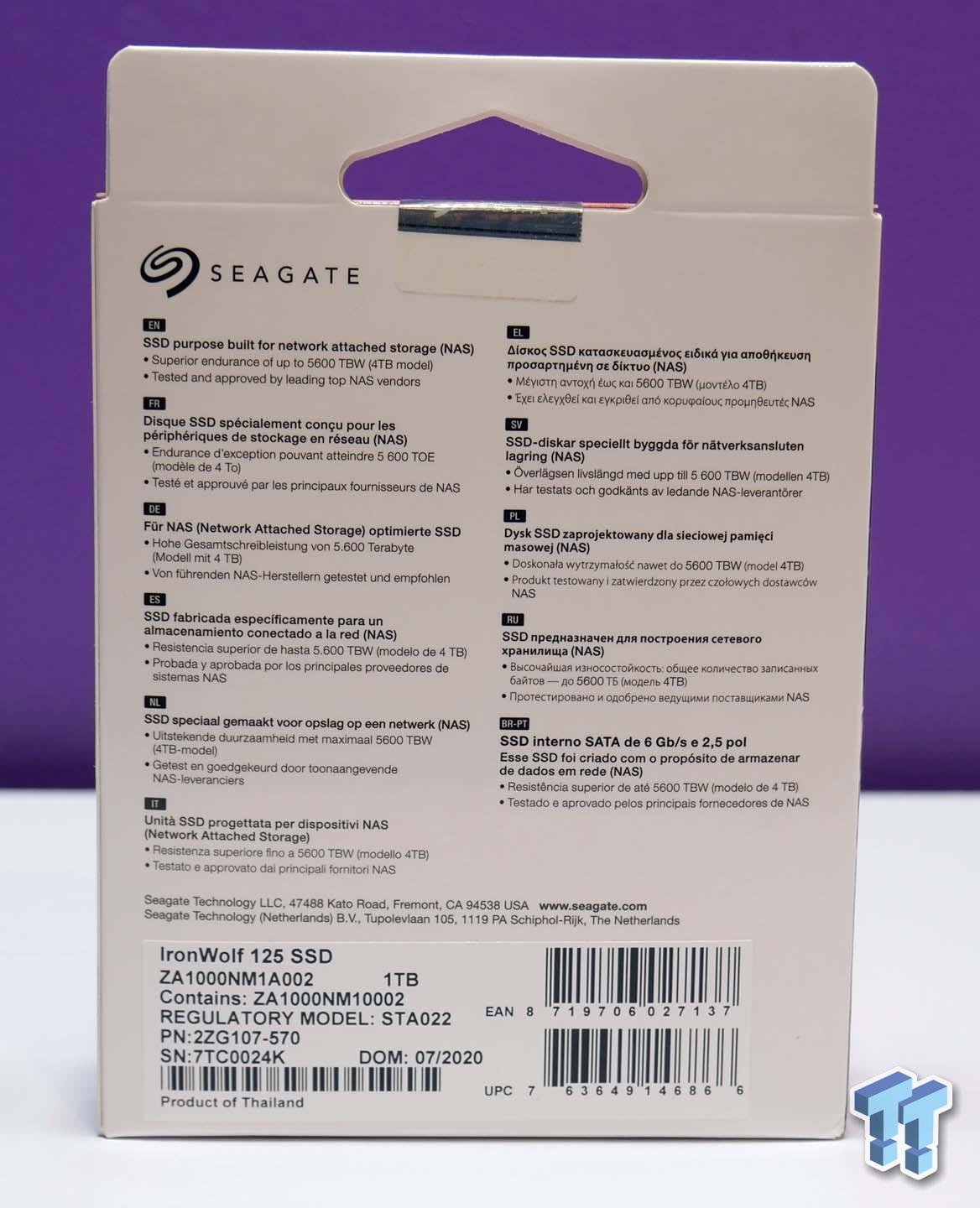 The back goes into more detail about the drive in several languages, while model and warranty information can be found towards the bottom. 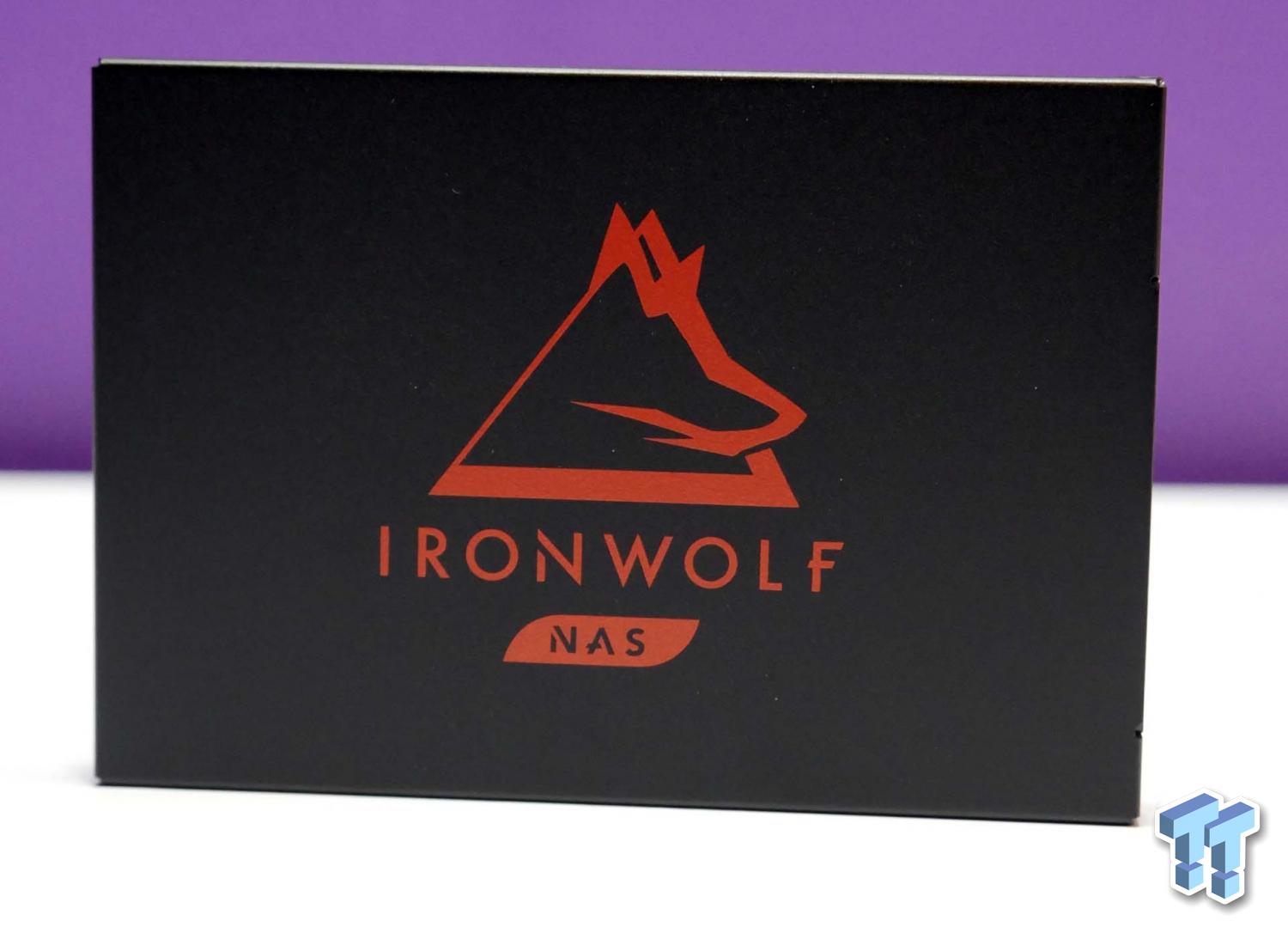 Unboxing, the drive is delivered with a guide and warranty statement. 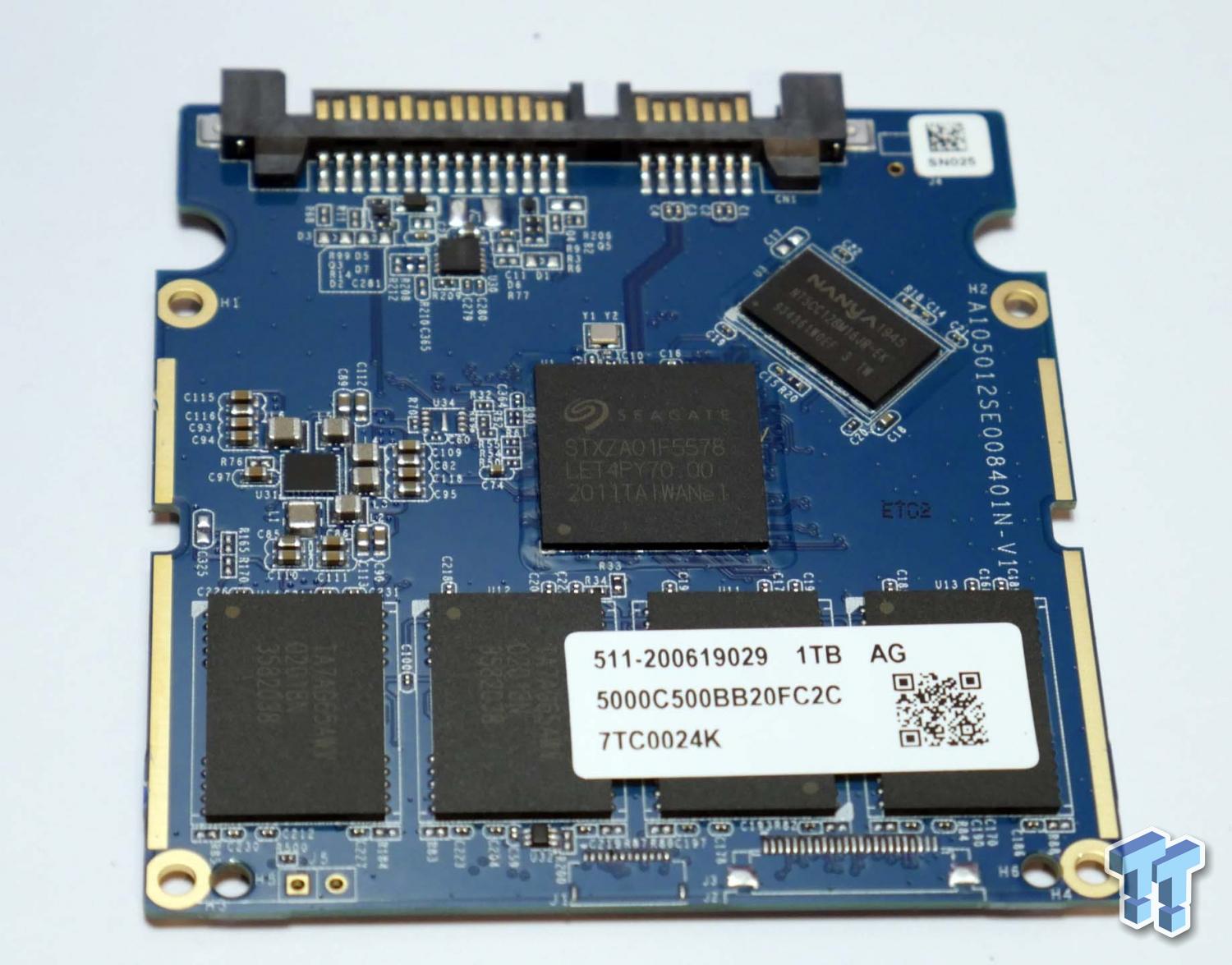 The drive itself is a matte black, IronWolf logo on the front. Opening the drive, we have the build, Seagate branded Phison S12 controller DRAM to the right, and Toshiba BICS TLC below. 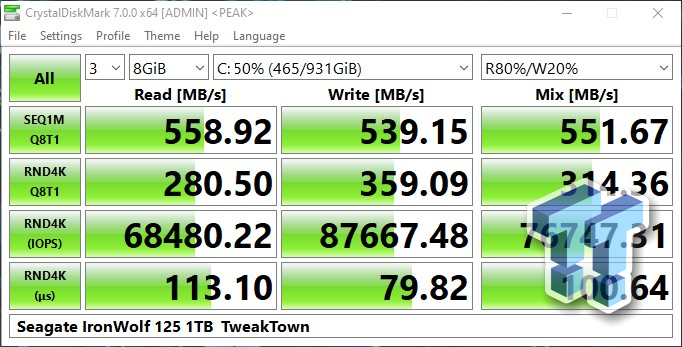 CDM is a staple in performance testing; version 7 has seen some updates in the workloads used for testing. Sequential performance for the IronWolf 125 came in at 558 MB/s read and 539 MB/s write - spot from the marketing. 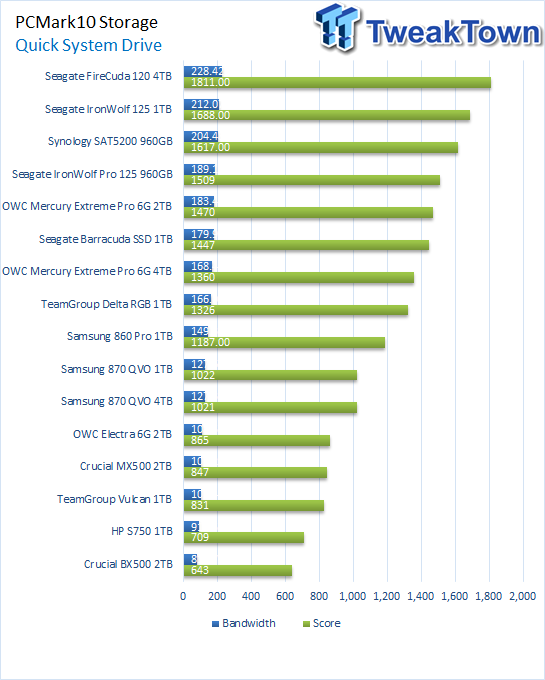 Pushing into PCMark10, the IronWolf 125 does amazingly well, ending with a score of 1688, second on our charts to the FireCuda 120. 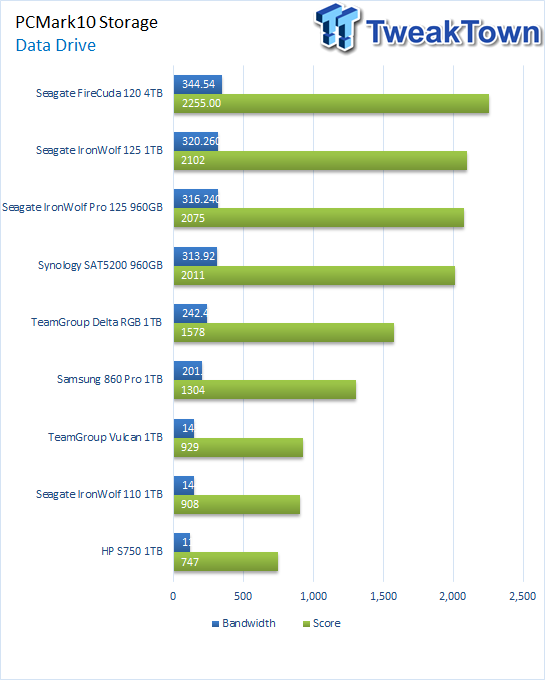 Data Drive once again showed solid results for the 125, scoring 2102 points second in our charts. 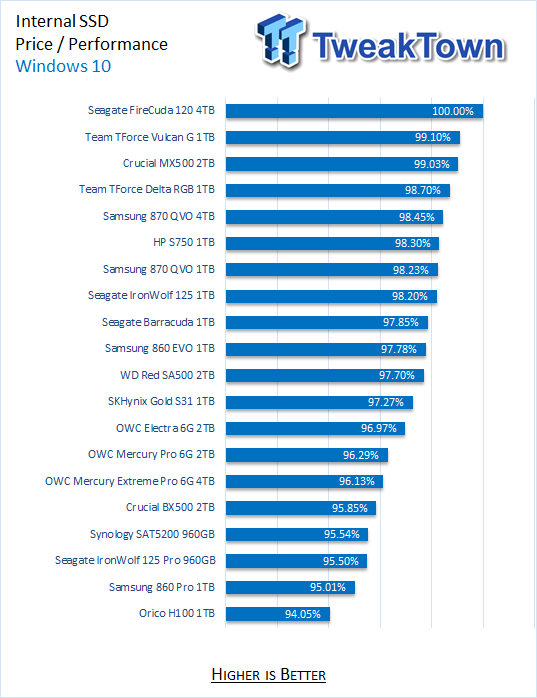 Starting with the build quality, the IronWolf 125 enjoys a proven design that we have seen in products like the Synology SAT5200 and Mercury Extreme from OWC. Seagate has surely built custom in firmware for their solution, which gives them a near 4x increase in 4K write performance over their first-generation solution while largely maintaining the endurance found on the 110; 1400TBW on the 125 to 1750TBW on the 100 for the 1TB models.

The performance in our testing was quite good. CDM offered 558 MB/s read and 539 MB/s write - on par with marketing. PCMark 10 showed the Seagate 125 outpace the Synology solution by 8 points in Quick System Drive testing. Moving to secondary drive testing with Data Drive, the IronWolf 125 nearly doubles the performance of the first generation 110, second only to the FireCuda 120.

One thing our price/performance testing never takes into account is endurance. On the face of things, the IronWolf 125 is a very expensive 1TB SATA SSD with an MSRP of $140.99, but if we look at endurance ratings, this drive offers 200 TBW higher than the 860 Pro and over double the 860 EVO, making it a suitable candidate for your NAS.

The IronWolf 125 is the perfect solution for those putting together an AFA or NAS appliance wanting the best drives for high endurance operation.