Filmed concurrently with its predecessor Back to the Future Part II, audiences in 1990 only had to wait seven months for the epic conclusion to the series, which comes with a much lighter touch than its rather heavy-handed predecessor. Tackling the Wild West genre with more whimsy than other more cinematic takes, but which underlines the series' trademark sense of fun, Back to the Future Part III ends the series on a triumphant, emotionally satisfying, and quite definitive note. And it's a good thing that it did, with a story arc that made sense and knew when it was time to wrap it all up.

With the McFly family timeline safe and the town of Hill Valley returned to its original serenity, a price has been paid by the eccentric Doc Brown (Christopher Lloyd), who has become trapped in the Wild West of 1885. To set things right once and for all, Marty McFly (Michael J. Fox) must make one last trip in the time travelling DeLorean - but without creating any further damage to the past, present or future.

Long after the timeframe of Back to the Future Part II became an eventuation, the quality of these films, both artistically and technically, will continue to hold them in very good stead; classics of the science fiction genre. Finally immortalized well on a physical disc, the Back to the Future series is a classic Hollywood trilogy that will live on long after our own timelines. 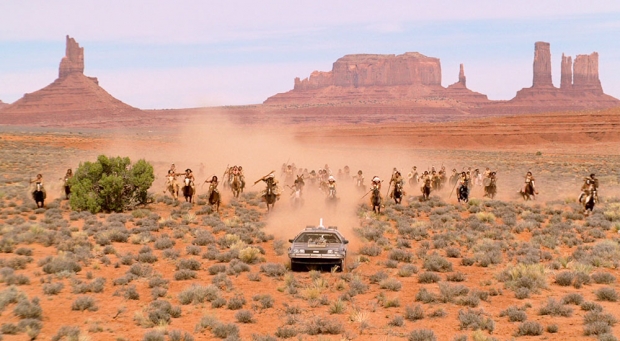 Back to the Future Part III is presented in its original aspect ratio of 1.85:1, encoded with H.265 compression, and finished with a Dolby Vision and HDR-10+ HDR pass, while retaining the base HDR-10 layer.

As with the first Back to the Future, Universal has scanned and digitally restored the original camera negative into a brand new 4K digital intermediate, which immediately makes all masters (and previous home video releases) utterly redundant.

Again, the fresh 4K remaster injects new life into the film, allowing it to shine as it never has before. Shot more ambitiously than its predecessors, the dense Wild West setting and bright outdoor setting of much of the film lends itself well to a stunningly impressive 4K frame, excelling with a crisp overall image, ripe with depth and dimensionality, fine grain structure, and perfectly saturated colors.

For fans intimately familiar with the film's look from successive VHS, Laserdisc, DVD, and most recent Blu-ray releases, this is a must-have upgrade that once and for all purges the mediocre image quality of the past. 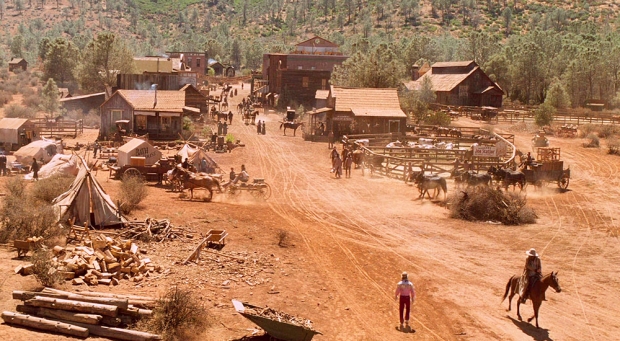 Back to the Future Part III is presented with a newly remixed Dolby Atmos object-based audio track.

Originally mixed for four channels, Back to the Future Part III has for many years ported the exact same, reasonably robust 5.1 audio mix for all previous DVD and Blu-ray releases. To mark the anniversary and accompany a stellar 4K transfer, Universal has taken the extra effort to offer an aural overhaul of the original elements, which take advantage of new height surround enabled equipment. Adding to this, the film's grand scope, including the climatic train sequence, is a natural for an impressive, immersive sound mix that has been taken advantage of well.

As with the previous two films, Back to the Future Part III's sonic improvements go above and beyond simply bolting on Dolby Atmos height information - Universal has gone back to the original audio stems to improve clarity, expansiveness, and bass response throughout, providing proceedings with some much-appreciated heft. Additionally, a few minor audio anomalies that had crept into the previous 5.1 mix have been corrected here, making this the definitive way to experience the film in the home theatre. 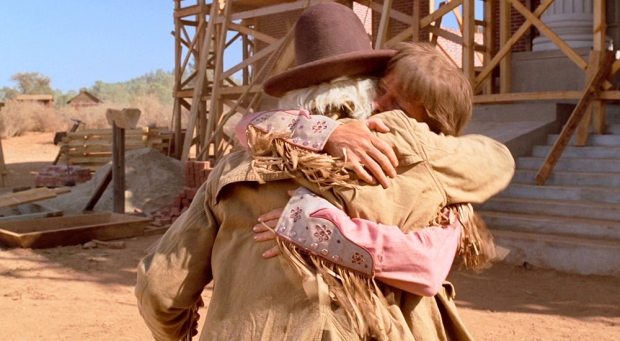 The 4K debut of Back to the Future Part III includes a pack-in Blu-ray, which preserves the majority of bonus features from previous DVD and Blu-ray releases, with the only notable exception being the U-Control picture in picture extra from the last Blu-ray. Let's jump in.

First up is the final filmmaker's commentary provided by producer Bob Gale and co-producer Neil Canton. The comments here are just as good as for the previous two films, even if there is still quite a bit of overlap between the featurettes we'll discuss later. The last Q and A commentary provided by Director Robert Zemeckis and Bob Gale was recorded live after a showing of the movie with film students from USC. Due to editing, these don't quite extend the full length of the feature film but impart a lot of useful detail.

The 2010 documentary Tales from the Future documentary returns with the final sections Third Times the Charm which looks at the story arc of the final film and The Test of Time which discusses how the series holds up to this day. Back to the Future: The Ride features the entirety of footage that was part of the now-defunct theme park attraction found at Universal Studios around the world, and its inclusion for posterity is welcomed.

A few odds and ends are rounded up in the final section, including the debatable quality of the ZZ Top Double Back Music video some mildly comical outtakes, two smaller featurettes on Designing the town of Hill Valley and Designing the Campaign which takes a closer look at the marketing of the film, and a random collection of Storyboards, Behind the scenes photos and Marketing materials. Only one brief Deleted Scene is included, but its deletion is particularly apt since it would have brought the whole tone of the film down.

Universal has hit the ball out of the park with Back to the Future Part III, which ends the series and an excellent 4K box set, with a bang.

Back to the Future: The Ultimate Trilogy [Blu-ray] 4K

Ben is based in Australia and has been writing entertainment based news and reviews since 2002 and for TweakTown since 2007. A student of film, Ben brings a wide understanding of the medium to the latest happenings in entertainment circles and the latest blockbuster theatrical reviews.